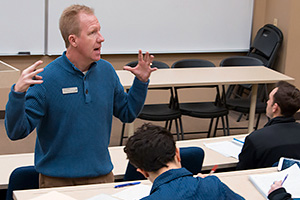 Lights. Camera. Action! Most people watch films and movies for pure entertainment, but McHenry County College film and speech instructor Jim Stockwell inspires his college students to not just watch a film, but to understand the message and meaning, and to appreciate the effort that goes into a production.

"Film is a backdrop for speaking and communicating, because sharing opinion is very important. I use film as a way to teach those skills," Stockwell said. "I want them to get more out of a film instead of just watching it, like why a director uses a certain camera angle. There’s a reason for certain shots. Critical thinking is very important."

Through his lively lectures in his Introduction to Film classes, Stockwell takes students on a journey behind-the-scenes of Hollywood, where they learn about such elements as camera angles, lighting, sound, editing and develop skills in critical analysis. He starts the semester with an epic, usually a Best Picture winner, and ends with a combination of genres, including musical, action, drama and comedy.

"I love letting people know about all the elements that go into making a film." Stockwell said. "We're used to watching films, but we don't think about everything that goes into them. I love enlightening students on how the process works."

Stockwell said he strives to provide a comfortable, safe atmosphere for students to share their thoughts and let them know that their opinion does matter.

"I want them to feel open to express their opinion and I don't want them to think they have to agree with me—I am interested in what they think," he said, adding that he doesn't reveal to students what his favorite film is until the course is over to avoid tainting their thoughts or feelings.

The thing he loves most about teaching is when students finally connect to the subject matter and get it.

"I love watching the aha moments," he said.

Stockwell has taught film and speech at MCC full-time for four years and prior to that, he taught at MCC as a part-time instructor for 17 years. He also worked as a corporate trainer for U.S. Bank, and previously honed his creative and technical skills working in both commercial TV in Champaign and public TV in Olney. He also showcased his talents in public radio, talk radio and as a DJ playing rock, oldies and country.

He originally majored in architecture at College of Lake County, where he earned his associate degree, but after watching the "Prince of Thieves" starring Kevin Costner, he became fascinated with filmmaking and script writing. He then majored in radio, TV and film at Eastern Illinois University, where he earned both his bachelor's and master's degrees.