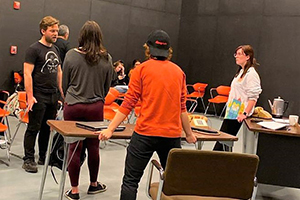 The Black Box Theatre at McHenry County College (MCC) is gearing up to premiere their production of the uproariously funny British farce, What’s All This, Then? on March 5. But this particular play holds even more significance for the College and its Theater program.

Beyond simply being a hilarious and entertaining comedy, What’s All This Then? was actually written by an MCC alum—Bill Daniel, a Chicago-based actor and playwright.

“I grew up watching Monty Python,” said Daniel of his playwriting influences. “I’ve always dreamed of writing a specific kind of English play using the same ‘tongue-in-cheek’ humor, and wanted to incorporate the vernacular and references that an English audience could identify with.”

The play follows Constable Madge Barker as she investigates the mystery of “cat-nappings” in the town of Croydon, South London. It is up to Madge and her colleagues Constable Simone Blockly and Detective Inspector Butterworth to find the stolen cats. They are assisted by one of the victims, Holly BaLue, but the press, led by reporter Leslie Twist, and the youthful mayor of the town get in the way. The hysterical comedy follows Barker’s journey as she works to solve this insane and outrageous case.

This will be the second time What’s All This Then? has been performed publicly.
“The play has had three years to grow, and now has a chance to be performed at the academic level,” said Daniel. “It’s a great play for students, as it gives them a chance to learn some of the fundamentals of farce.”

A farce is a specific kind of comic dramatic piece that uses highly improbable situations, stereotyped characters, and extravagant exaggerations.

During his time as an MCC student from 2005 to 2007, Daniel was involved in four productions including Everything in the Garden, Do Black Patent Leather Shoes Really Reflect Up?, The Man Who Came to Dinner, and A Lie of the Mind. He returned eight years later to perform in Cabaret.

“Everyone was so welcoming at MCC,” said Daniel. “I didn’t really know anyone when I first started school there, and within a semester, I began cultivating a great little network of talented folks.”

Daniel also credits MCC Theater Department chair Jay Geller with being one of the cornerstones of his actor training.

“MCC was the bridge that helped me take my high school acting skills to the next level,” Daniel said. “Exploring given circumstances, studying the beats of a play, mining for emotional depth, and exploring specific techniques were not things that a younger me would have known. It really gave me an edge when I transferred to Illinois State University (ISU) with two more years of theatre experience than a lot of other students had.”

Daniel graduated from ISU in 2009 with a Bachelor of Theatre Arts degree.

In addition to What’s All This Then?, Daniel has seen his plays performed at the WildClaw and EDGE Theaters in Chicago, the latter of which was his primary patron for several years. The EDGE produced his play Holmes v. Holmes, a mashup of the story of Sir Arthur Conan Doyle and Devil in the White City; his adaptation of The Three Musketeers called “La Petit Mousquetaire”; and the first production of What’s All This, Then? in 2017.

“When I moved away from Crystal Lake, I never thought I’d see a play I’d written get performed anywhere near my hometown, and certainly didn’t think I’d see one done at MCC,” he said. “It’s an honor and a privilege to see my show and hear my words being performed in the same building that gave me so much of a theatrical foundation. I am very thankful for this opportunity.”

"MCC was the bridge that helped me take my high school acting skills to the next level."
–Bill Daniel