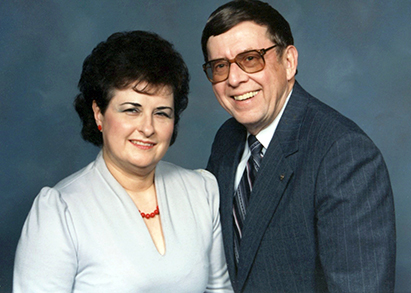 Sally Reuter Radka was a single mother of four children when she entered McHenry County College in the early 1970s, then located at the old Pure Oil Building in Crystal Lake. Several years later, she earned her master’s degree in social work with high honors and served her entire professional career as an outreach social worker for the Lake County Special Education District. Following in her footsteps as MCC students were 11 members of her blended family, including two of her children and a granddaughter.

To honor the legacy of her devotion to lifelong learning, her husband John Radka of Champaign and formerly of Woodstock, has established the Sally Reuter Radka Family Endowed Scholarship that will award $500 to a deserving MCC student beginning in spring 2019 semester.

“She had a tough life,” Radka said, referring to Sally losing both of her parents while she was in high school and then losing her son, Gregory, in a car accident in 1977. Her daughter, Cindi and son-in-law, Steve, both died at young ages. Sally was diagnosed with dementia in 2015 and passed away at age 82 in November 2017.

Despite Sally’s life’s hardships, Radka said he admired her motivation to return to college to earn her master’s degree and taking the train to the University of Illinois at Chicago campus her entire time in grad school. The couple met through a mutual friend and married in 1981, blending their two families with his three children and her three children. Later, they both enrolled in a real estate course together at MCC in the 1980s.

Sally and John had a happy, fulfilling marriage, said John, who worked as assistant superintendent of business operations for Woodstock Community Unit School District 200 from 1967-1991.

“During this time, Sally and I got involved with Marriage Encounter and participated for 27 years doing presentations for married couples in Northern and Central Illinois and Texas,” Radka said, noting that they spent eight winters in Corpus Christi.

In addition, John and Sally were active members of the Rockford Catholic Diocese Remarriage Ministry team, which presented seminars for 12 years to remarried couples. Radka added that Sally brought so much to those programs, as she was knowledgeable and an avid reader.

“She was intelligent, always curious and so engaging, along with having a sense of humor,” Radka said.

Radka also was committed to education, as he earned his bachelor’s degree in speech and a master’s degree in elementary education, both from Illinois State University, not far from where he grew up in Bloomington. After serving in the Korean War for two years, he taught school in Hoopeston for four years then became an assistant principal in Farmington for three years, where he also taught speech and served as a guidance counselor.

“Back then, you did everything,” he said, adding that he then became principal at Spoon River Valley Schools in Western Illinois for grades 7-9 for two years, while still serving as a guidance counselor. After that, he became district superintendent for three years. He also earned advanced certificates in finance and administrative courses at Western Illinois University.

When asked what Sally would think about this scholarship in her memory, Radka said, “she’d be pleased. She’d smile and say that she’s passing it on so other people could avail themselves to a quality education at MCC.”

For more information about the Sally Reuter Radka Family Scholarship, contact the Friends of MCC Foundation at (815) 455-8721 or send an email to foundation@mchenry.edu or visit www.mchenry.edu/scholarships.